One of the forgotten airfields of the county. ‘Forgotten’ in the sense that this was a temporary wartime airfield, without concrete runways and used by the RAF and USAAF, which closed in April 1946 and of which very little trace now remains. The people of Bottisham have, to their credit, always kept the memory alive. A village road has been named after a USAAF airman – Colonel Thomas JJ Christian Jnr. – who was killed in action on 12 August 1944. There is also a memorial plaque in the Church of The Holy Trinity. The soon-to-open Bottisham Airfield Museum will be a welcome addition to these memorials.

Once there was open farmland. Then an airfield. Now, again, there is farmland. The site of Bottisham airfield has largely returned to its original state. Almost no trace remains of the men, machines, vehicles and buildings that populated this part of rural Cambridgeshire during the middle and later years of World War Two. Except that the area is quite a bit less rural than it was. Bottisham village has grown in size and the A14 slices through the north-eastern corner of the old airfield site, effectively separating it from the village by a river of traffic. In the circumstances, it doesn’t sound as though there’s anything at all to see or experience.

Fortunately, that’s not the case. Step away from the vicinity of the A14, especially going south into the open farmland, and it really doesn’t take too much imagination to picture the airfield site as it might have been. The narrow country roads are still largely there, the fields stretch away into the distance, and every now and then there’s the hum of a light aircraft crossing overhead. It helps that a public footpath runs from Wilbraham Road towards the line of one of the grass runways; and this line is itself crossed by the Little Wilbraham Road. 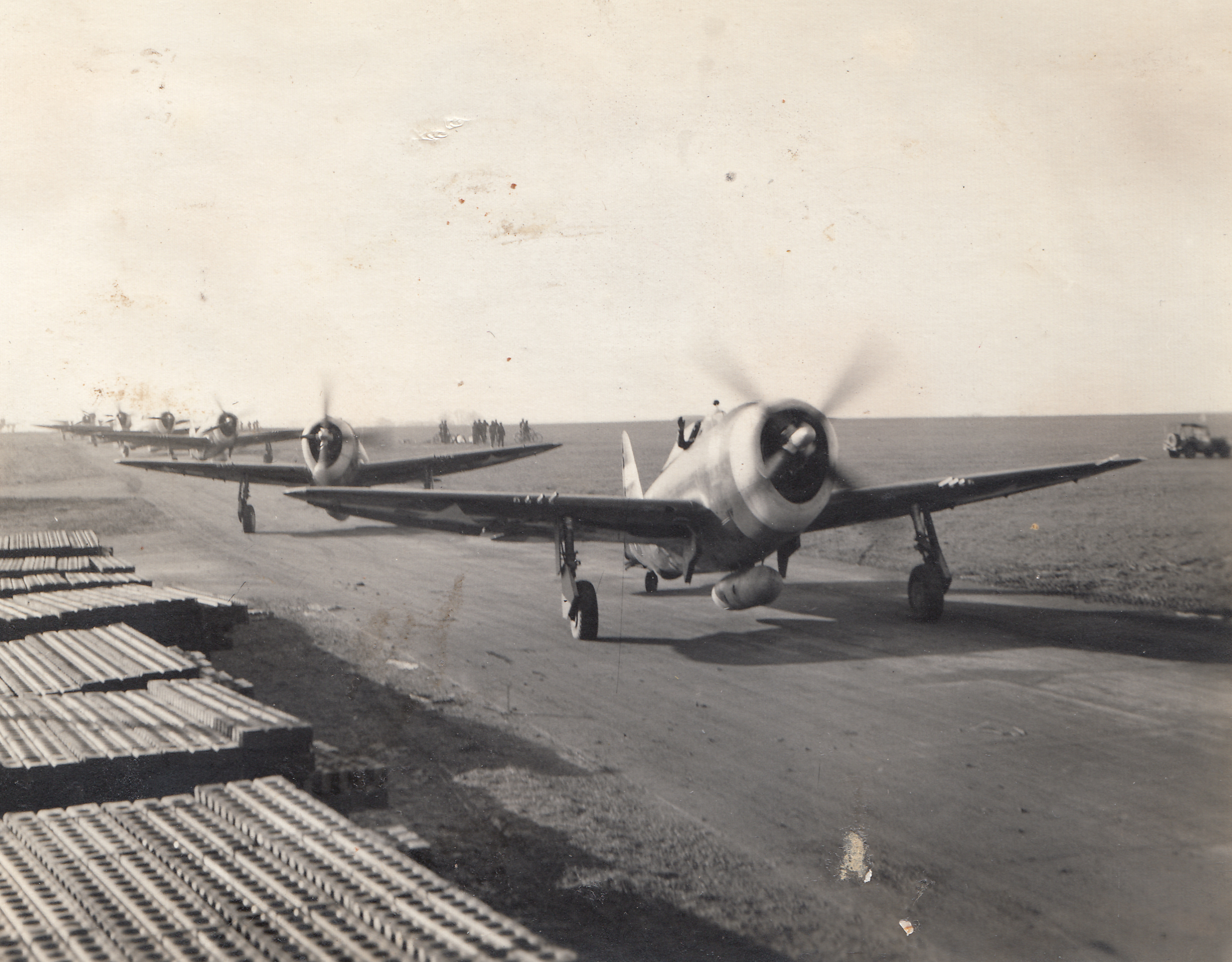 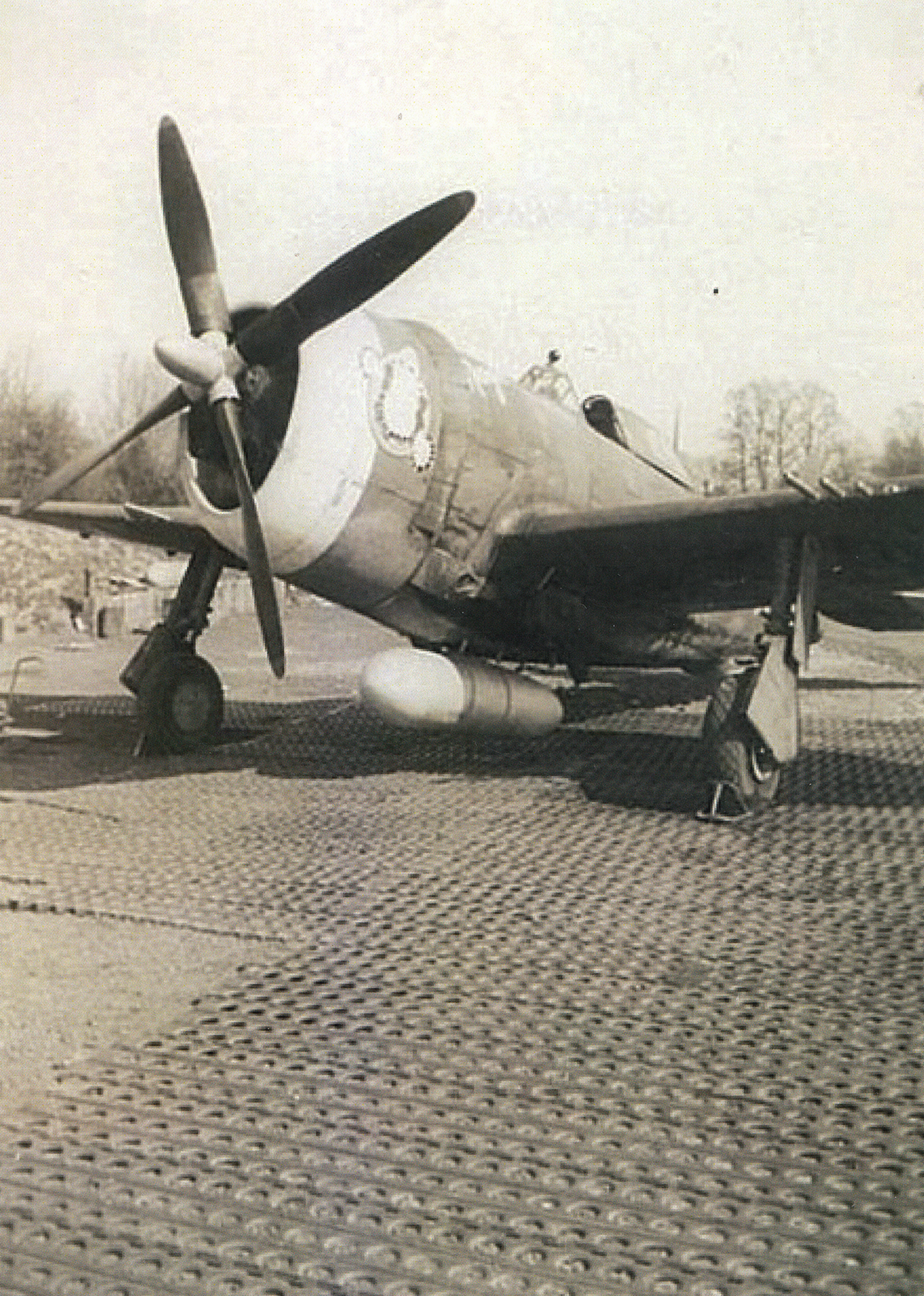 All of the hangars and almost all of the buildings have now gone. The only ones remaining within the perimeter of the airfield site have now been taken over by the Bottisham Airfield Museum. (Direction on how to get there can be found below). As the museum has not yet opened, it’s not possible to describe its contents in detail.

However, the museum has been in existence since 2005 and a fascinating collection of objects, memorabilia, documents and photographs has gradually developed. The new premises, including a Nissen hut erected where a previous one once stood, will enable the museum to display its whole collection to the best advantage.

There are other ways of keeping the memory of Bottisham airfield alive as well. Apart from the memorial plaque in the village’s Church of The Holy Trinity, the American Air Museum in Britain holds a fine collection of photographs of the men and machines of the airfield. Many of these photographs are now available online and some of them are included in this site. (See below for details of the museum’s website). 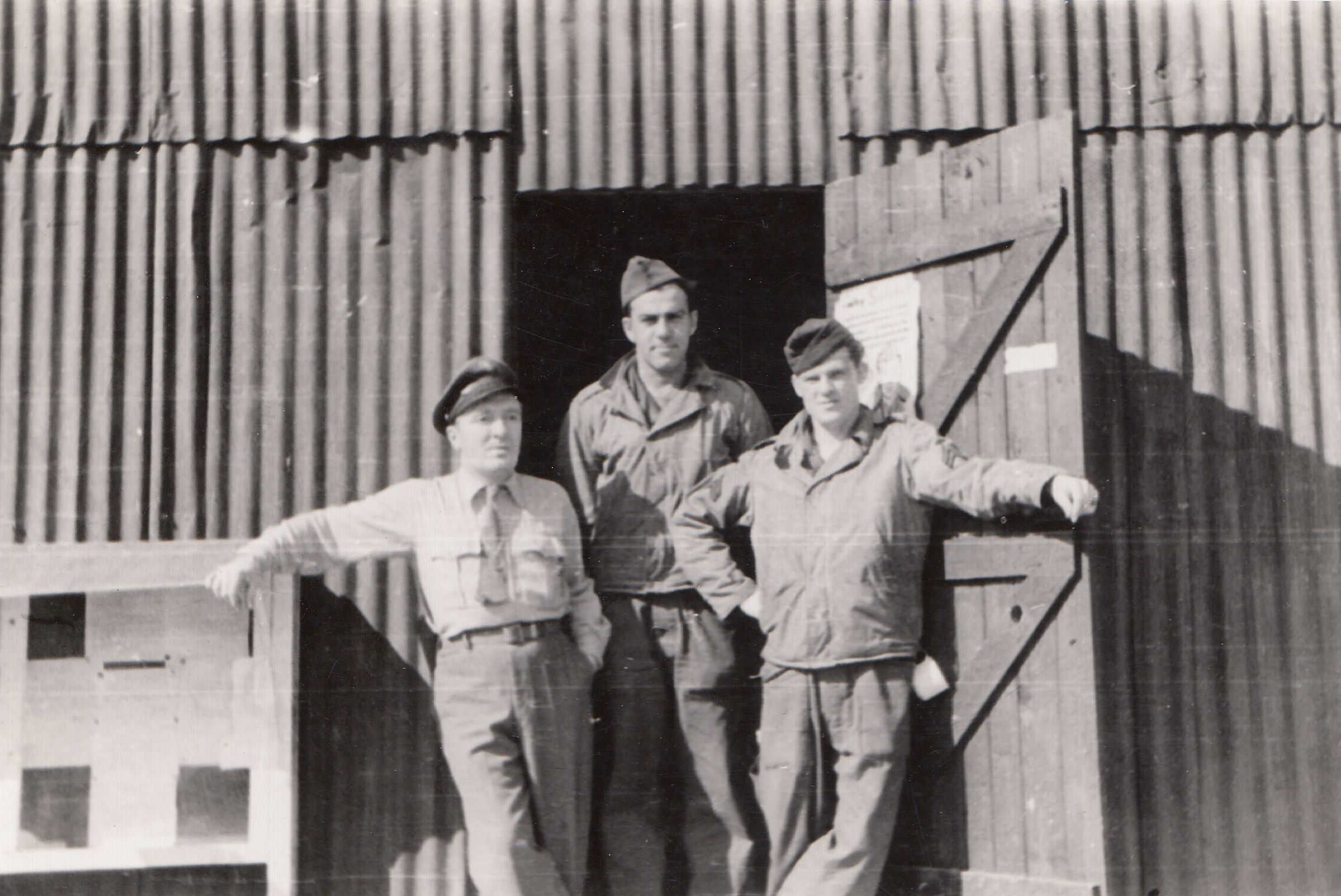 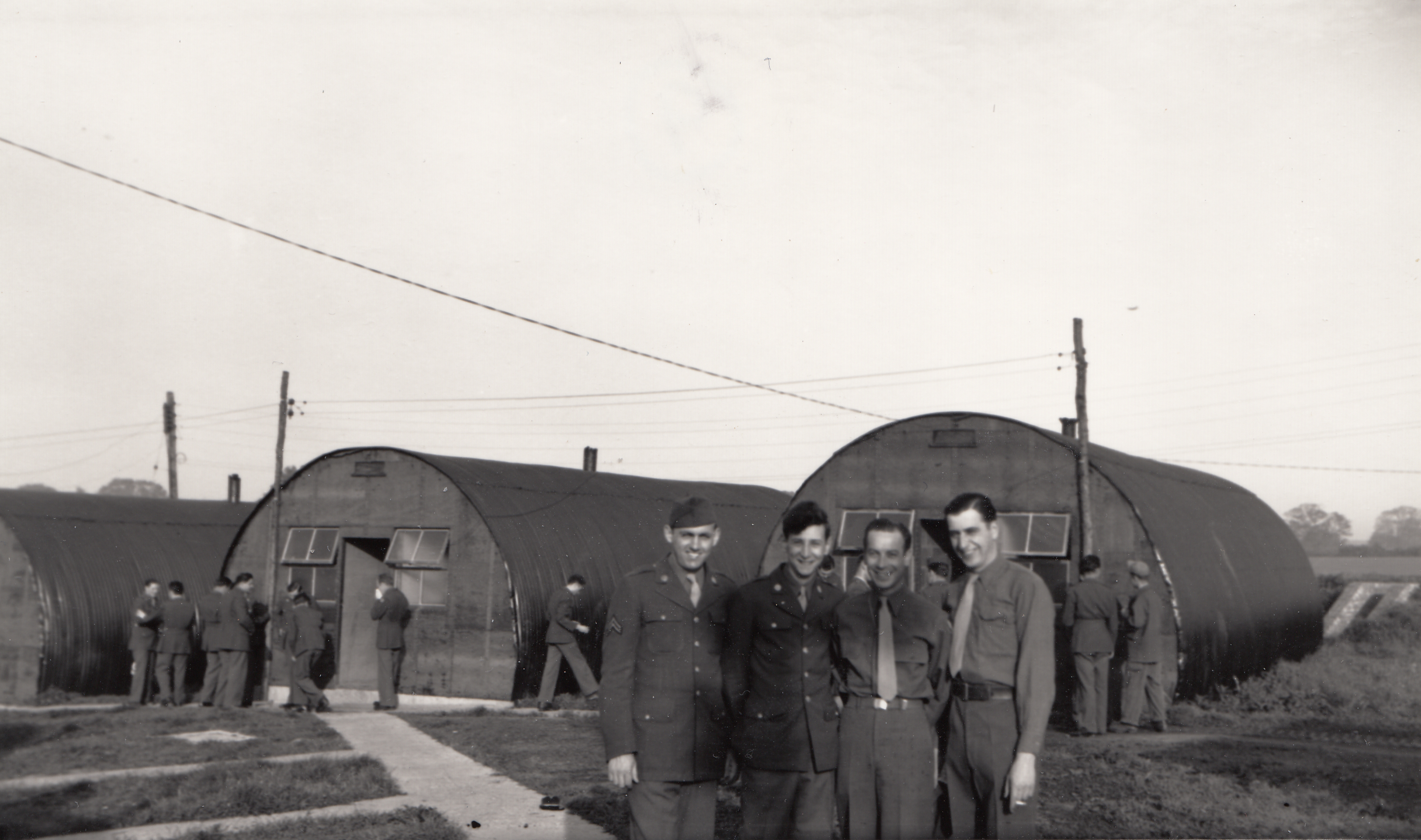 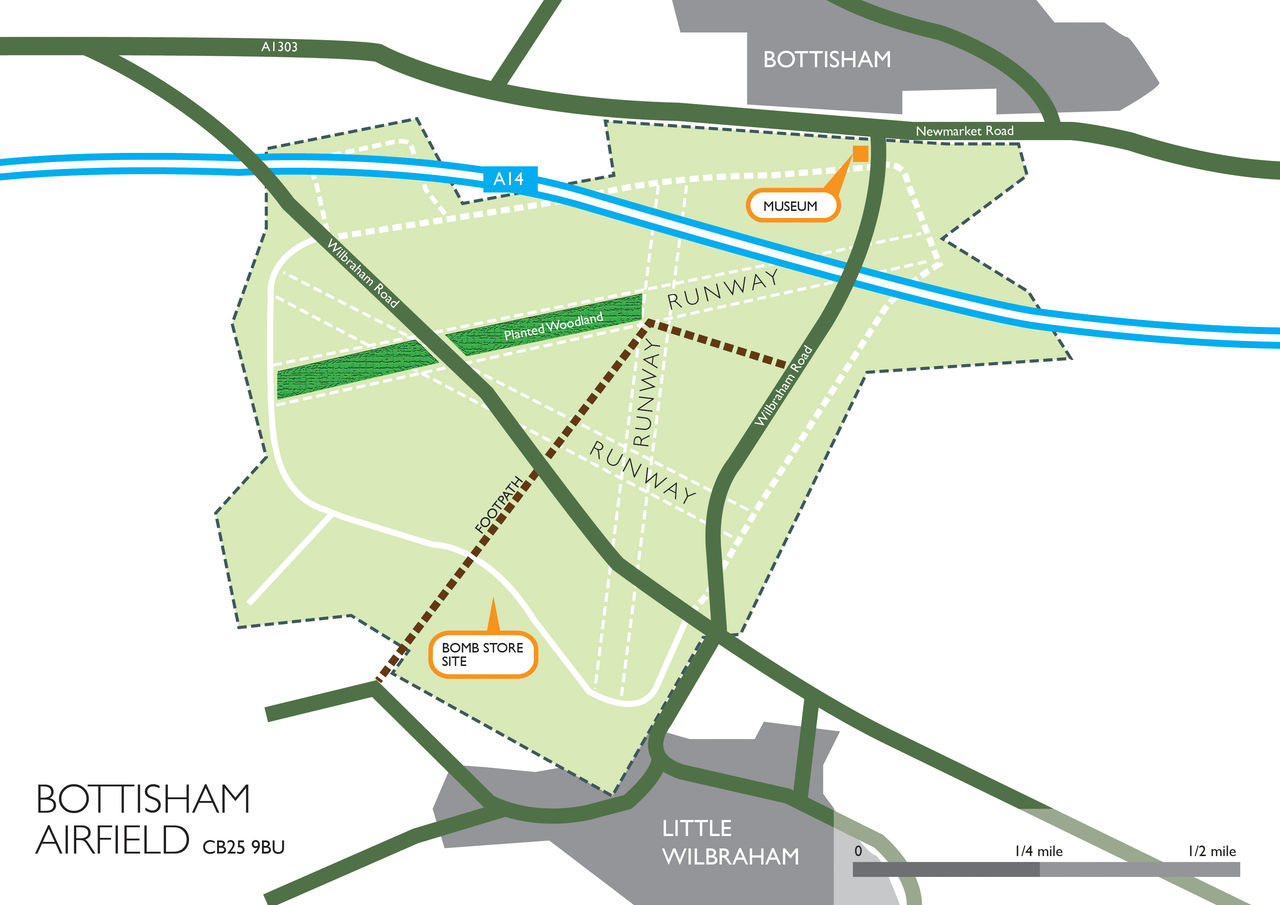 The two closest stations are Cambridge and Newmarket. The former has direct services to London King’s Cross, while the latter has services to London Liverpool Street. From either station, you can take a taxi to Bottisham and the museum.

There is a bus service to Bottisham from Cambridge. However, you are advised to check the County Council website first for details before making your journey. The relevant link is: www.cambridgeshire.gov.uk and then follow the link for ‘Bus Timetables’.

The website indicates that admission will be free except for special events.

We’re presently unable to confirm the status of disability access to the museum. The public footpath runs over generally even ground and remains mostly level.

The museum is approximately three miles equidistant between Cambridge to the west and Newmarket to the east. This means that there’s plenty to do and see within a very short distance.

For Newmarket and its surroundings, there are a number of useful web sites worth consulting – some of which are shown below.

There’s an Italian and an Indian restaurant in Bottisham, as well as a pub, ‘The Bell’. For accommodation, however, you’ll have to look a bit further afield.

There’s a wide choice of possibilities and the web site shown below is a good place to start looking. However, special mention should be made here of the Eagle pub in Benet Street, Cambridge. The RAF bar at the rear has its ceiling and walls covered with the signatures and graffiti of World War Two airmen of all nationalities.

Quite apart from being a great pub, which originally opened in 1667, the Eagle also merits a mention as the place where, in 1953, Francis Crick announced that he and his colleague James Watson had discovered the ‘secret of life’, aka the structure of DNA. Of course, many pub patrons claim to have discovered the secret of life, sometimes rather late into the evening, and so the announcement might have been taken with the proverbial pinch of salt. But this one turned out to be true and there is a blue plaque next to the entrance to commemorate the occasion.