In 1956, this cemetery was declared the only permanent American military World War Two cemetery in the UK. So it has remained. There are 3,812 graves and a further 5,127 names recorded on the Wall of the Missing. Beautifully maintained, and situated on rising ground near the village of Madingley, the site is a most impressive and dignified tribute to all those service personnel who lost their lives during the war. 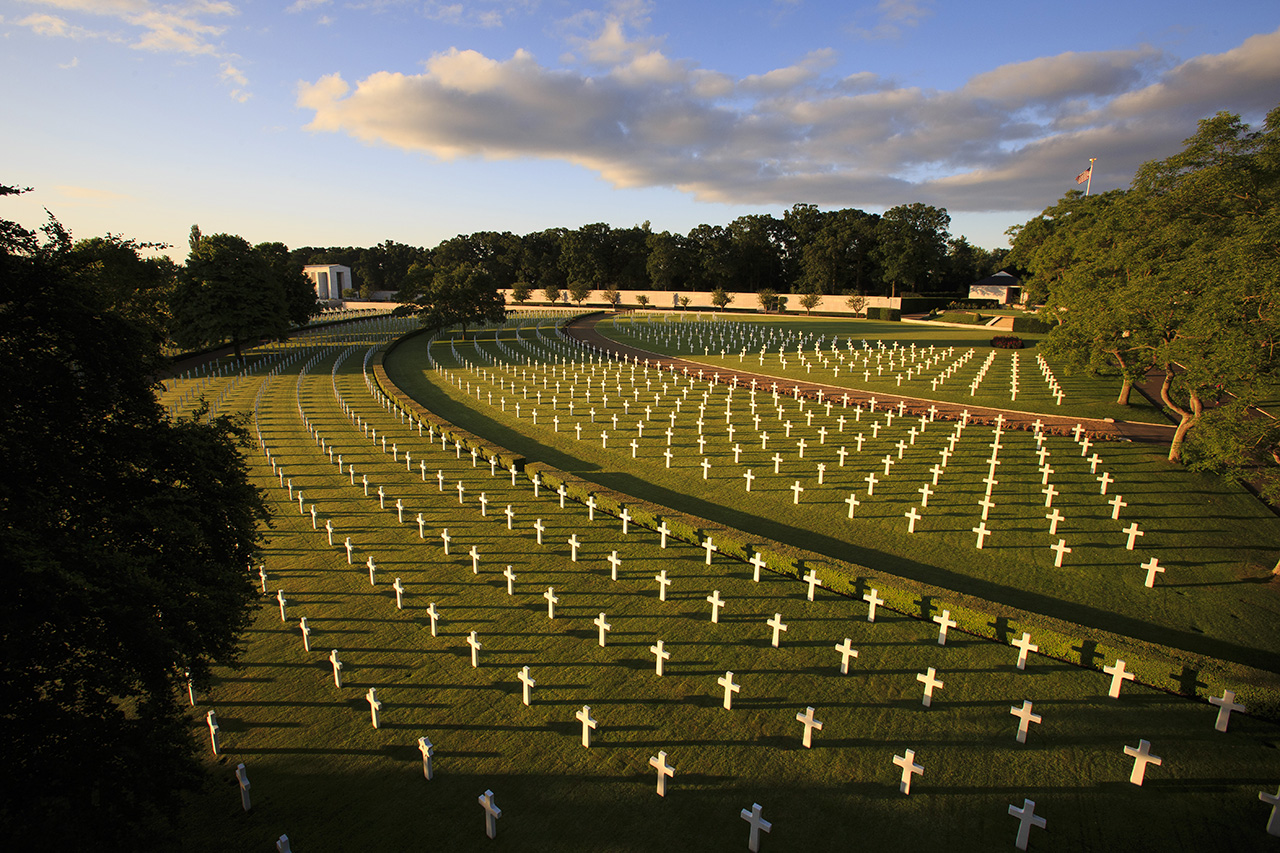 The Cambridge American Cemetery and Memorial at Madingley is surprisingly large. Surprising in the sense that US forces participated in no land battles on British soil. Nearly all those who are buried or whose names are commemorated therefore died accidentally, or at sea, or in the air. The scale of these losses itself indicates the scale of the US military involvement in this part of Europe during the years 1942-1945.

The cemetery and memorial are maintained by the American Battle Monuments Commission (ABMC). The land was originally donated by the University of Cambridge in 1943 for use as a temporary cemetery. In July 1956, the cemetery was dedicated and designated as a burial ground in perpetuity. Those who had been buried elsewhere, at locations all over the country, were reinterred here.

As might be supposed, those buried or commemorated originally came from every corner of the United States. The place names have themselves become a roll call of the country’s commitment to fighting and winning the war: Nebraska, California, Minnesota, Wisconsin, North Carolina, Texas, Utah, Maryland… Just as the names of the individuals hint at family connections to so many locations both within and well beyond the country: Ausfresser, Zieminski, Wilson, Flaherty, Castiglione, Martinez, De Hass, Herzog, Jorgensen, Miller, Ostrowski, La Robardiere, Shakespeare…

The graves are arranged in plots, themselves arranged in a semi-circular pattern radiating outwards and down the slope. The curving lines of white headstones are powerfully suggestive of the wheel of life. Although, of course, the lines do not and will never meet in a circle – just as so many of the young lives were cut unexpectedly short and never reached the full span of years expected in more normal times. It is, without question, a very moving experience to traverse these lines and consider what might have been had all these individuals survived to return home.

The Wall of the Missing is guarded by four statues: a soldier, sailor, airman and Coast Guardsman. The statues are spaced along a wall on which tablets record the names of all those who have no known graves. Glenn Miller’s name is here – the popular bandleader whose aircraft went missing somewhere over the English Channel on the night of 15 December 1944. 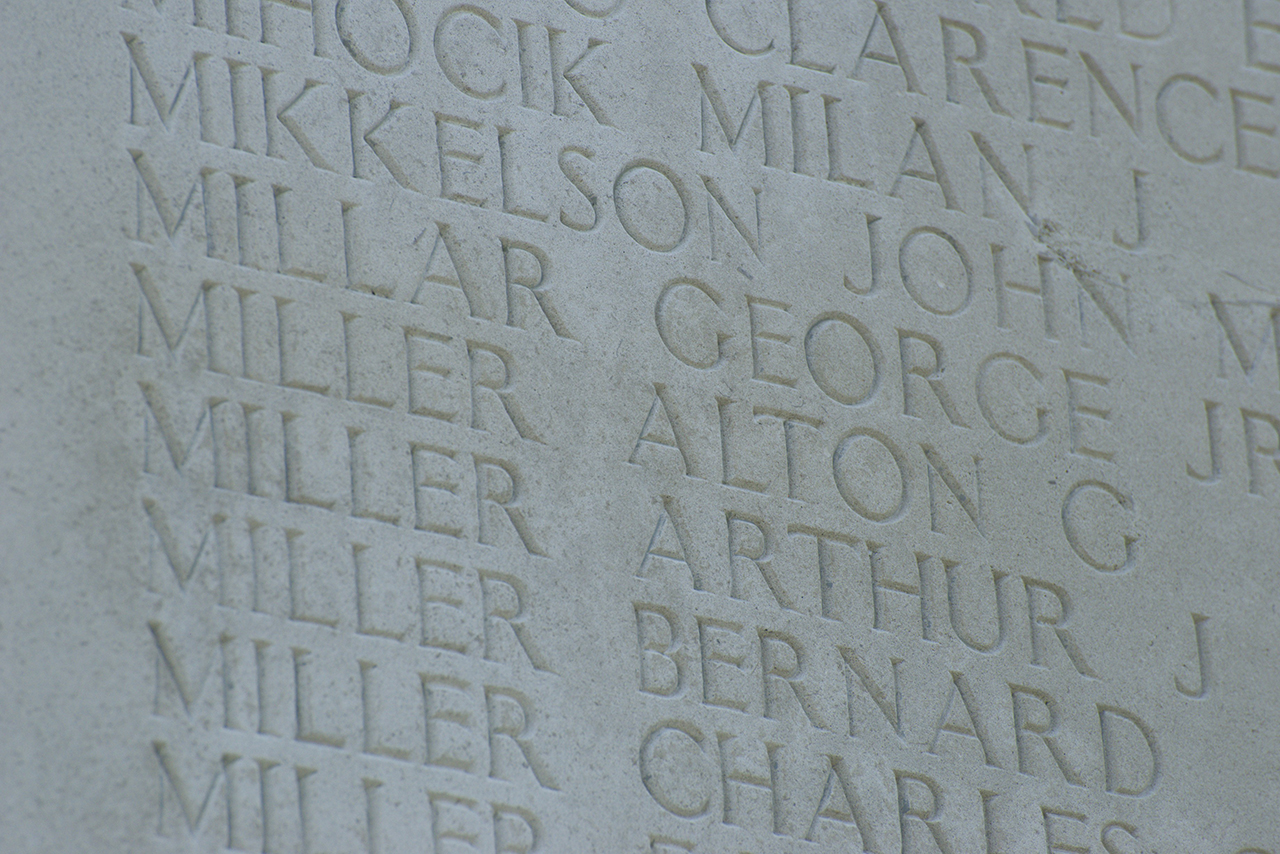 The Wall stretches from a circular flagpole plot near the main entrance to the Memorial Building. Built of Portland stone, the building houses a chapel and, on its south-facing wall, there is an immense map of the United Kingdom indicating the locations of every American unit during the war. This map complements the great map inside the building, entitled ‘The Mastery of the Atlantic – The Great Air Assault’, which depicts the main air and sea routes taken by ships and planes. The Memorial Building is large – 85 feet long, 30 feet wide, 28 feet high – but it was designed with the utmost care and attention to detail. It feels exactly right for its location. 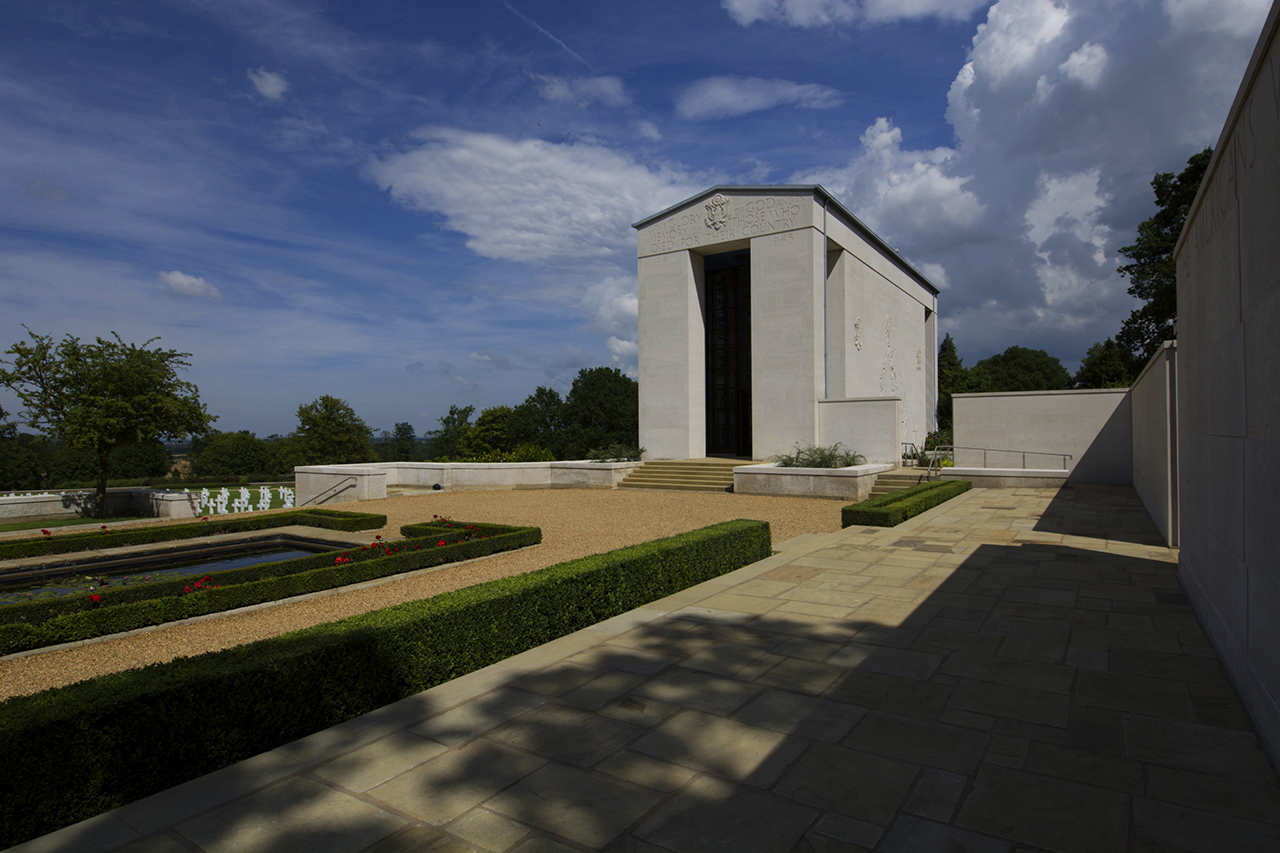 An excellent Visitor Centre has been opened, near the main entrance, and it is well worth spending some time here. The context in which the war was fought is explained and some of the personal stories behind the names are told. The staff are unfailingly helpful and are always ready to assist visitors in finding a particular gravestone or name. 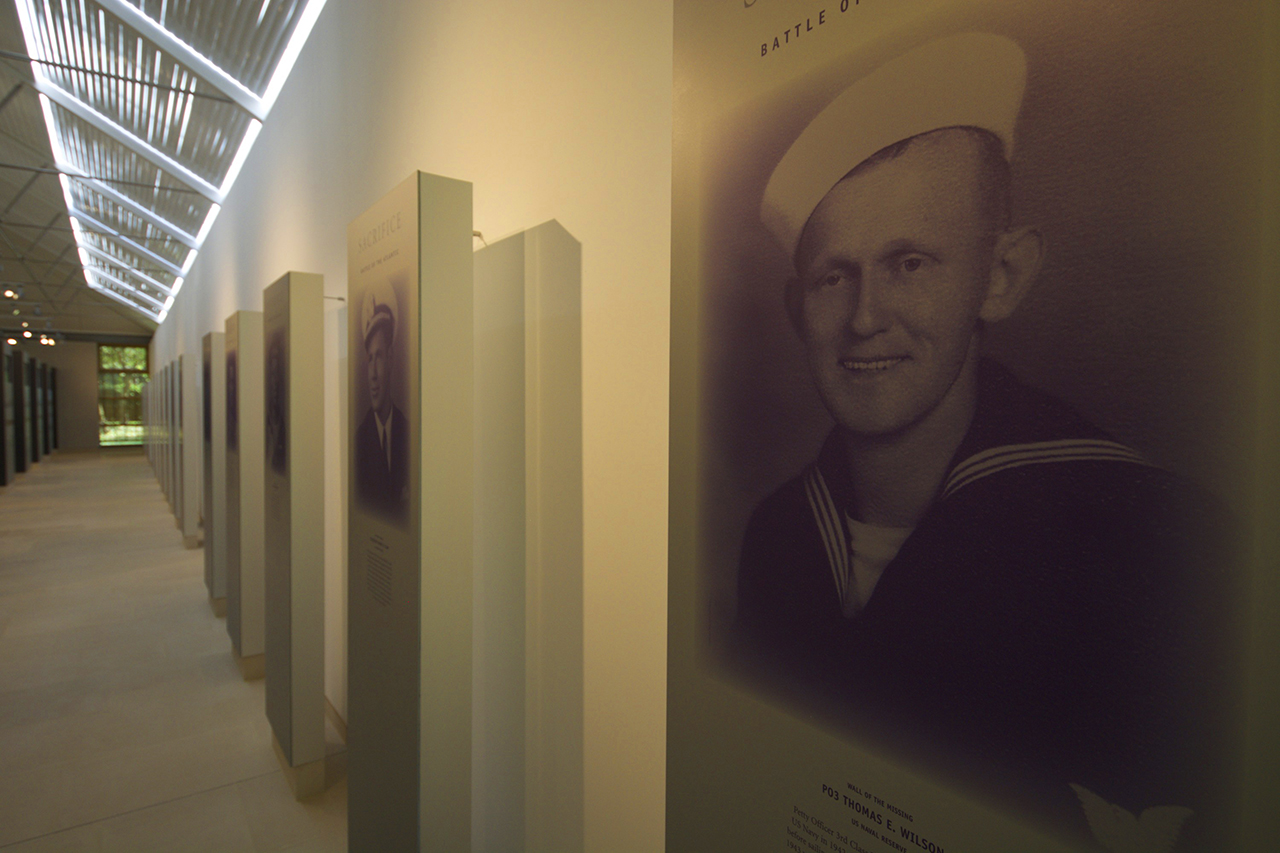 Some of those commemorated and buried here served in USAAF units based in Cambridgeshire. The actual number has not yet been established. What follows is therefore an illustrative example involving just one Bomb Group.

On the evening of 27 May 1943, a B17 ‘Flying Fortress’ of the 412th Bomb Squadron, 95th Bomb Group, parked in a dispersal area at Alconbury was being loaded with bombs prior to an operation scheduled for the next day. For reasons that have not been finally established, one of the bombs exploded and set off a devastating chain reaction. 18 men were killed instantly, 21 seriously injured and a further 14 men slightly injured. One of those seriously injured died later. Four aircraft were destroyed and eleven others were damaged.

Six of those who died are buried at Madingley. They are: 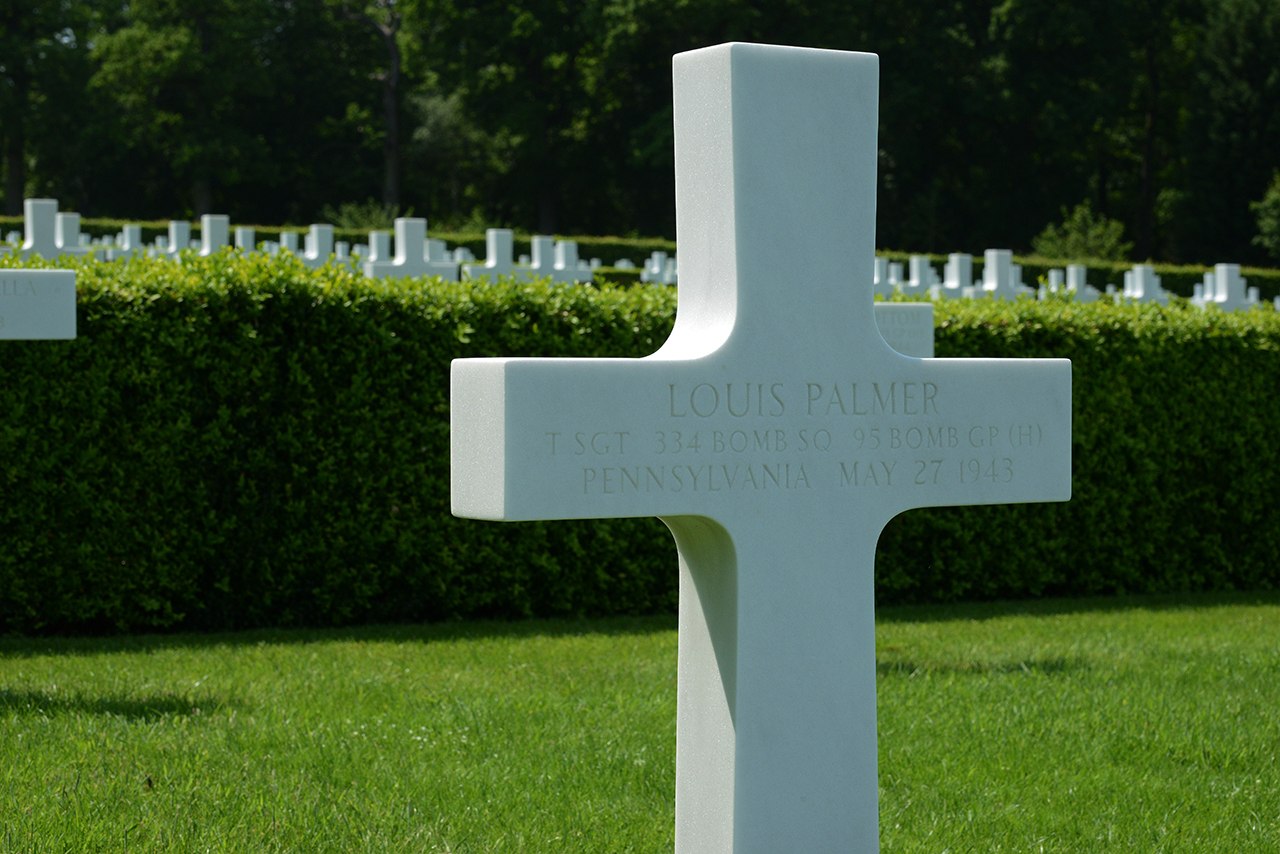 It is assumed that the remains of the others were returned to their families in the USA. The ABMC does not record any of the names of the other fatalities as being buried in its cemeteries or commemorated as missing with no known grave.

On 27 May 2013, a memorial plaque was unveiled at Alconbury. It was noted during the ceremony that the 95th Bomb Group had only recently arrived in the UK from its base in South Dakota. Its aircraft were also operating from Framlingham in Suffolk and the whole group moved to Horham, also in Suffolk, during June 1943 – where the group remained until the end of the war. The 95th Bomb Group was the only such formation to receive three Distinguished Unit Citations and one of its aircraft holds the melancholy distinction of being the last B17 ‘Flying Fortress’ to be shot down over Europe during the war.

The memory of the Group and its four squadrons is kept alive in the UK by the 95th Bomb Group Heritage Association. The association is responsible for an excellent museum located in buildings at Horham formerly used by the Group’s personnel. The museum is a fitting tribute to a Group which lost 156 B17s in combat, together with a further 36 for other reasons. 569 men were killed in action, with a further 3 men missing, presumed killed, in action and 63 men killed in accidents. The worst of these accidents was unquestionably the one described above. Even though the Group was not resident for very long in Cambridgeshire, part of its considerable heritage is indelibly associated with the county. 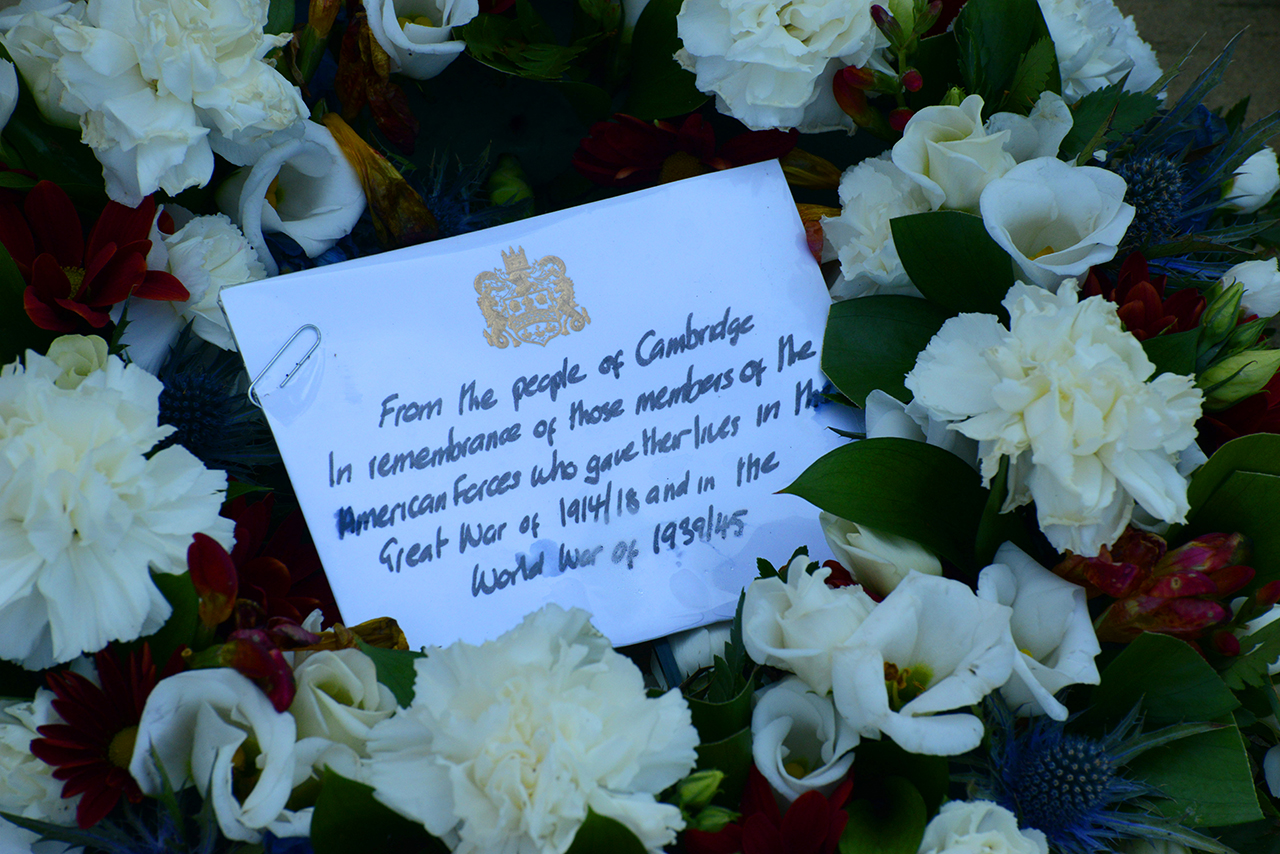 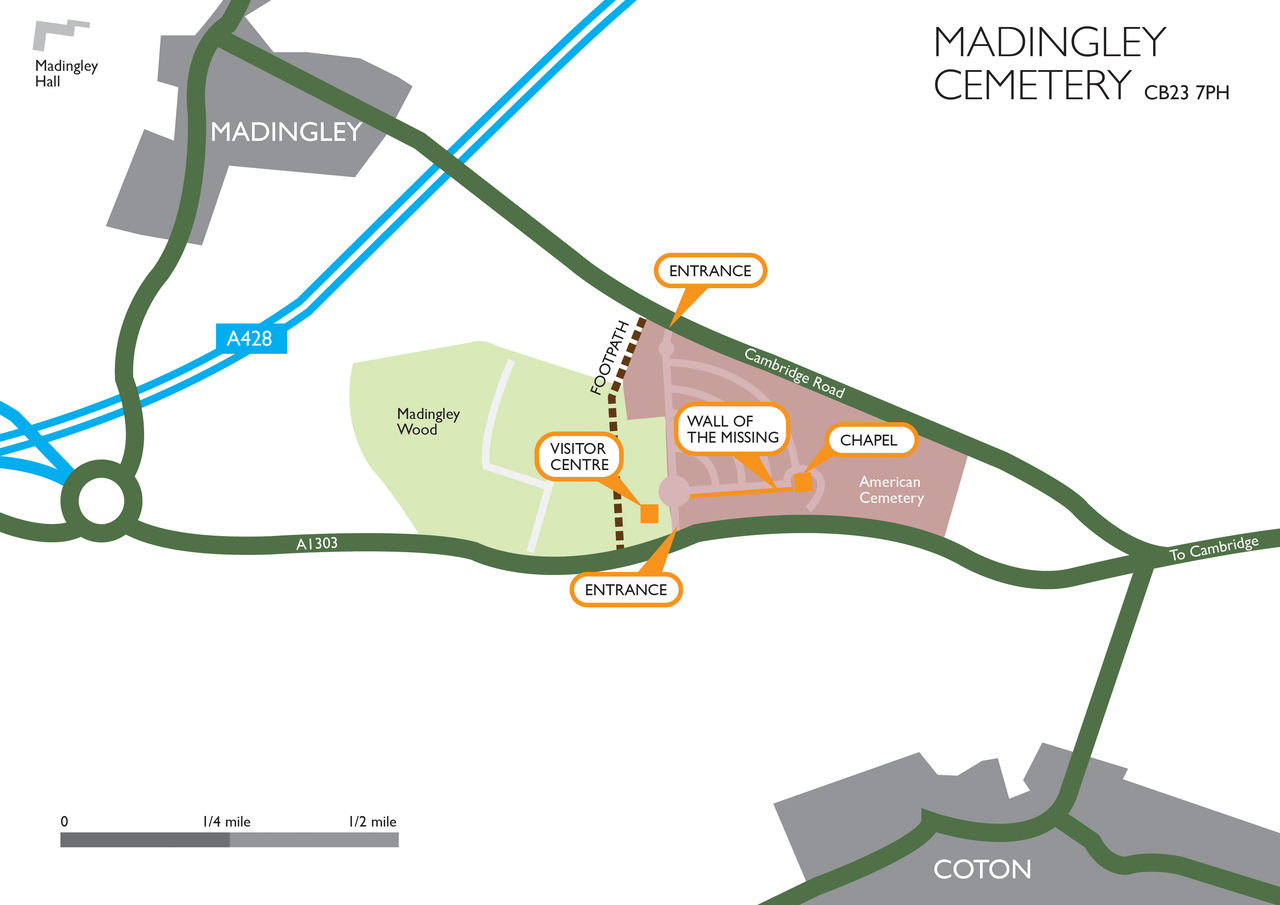 The Cemetery is situated very near to Madingley village, approximately three miles west of Cambridge. There is a bus service to Madingley but it is infrequent. Taking a Cambridge-based tourist bus which includes Madingley as one of the stops on its itinerary is a much better option.

By car, it’s necessary to follow the A1303 out of – or towards – Cambridge. Both Madingley and the cemetery are well signposted.

The cemetery and the visitor centre are open daily to the public from 9 a.m. to 5 p.m., except on 25 December 25 and 1 January. When the cemetery is open, a staff member is on duty to answer questions and escort relatives to grave and memorial sites.

Places to eat and drink

There are far too many possibilities in Cambridge to list here. It’s best to consult a suitable web site – details of which are given below.