A World War Two airfield site, used by both the RAF and the USAAF. Although few of the original buildings now remain, there is an excellent memorial commemorating all those who flew from the airfield. Most of the site has been returned to agricultural use and, unlike some other sites in the county and elsewhere, it seems that there are no plans at present for redevelopment into housing or other uses. 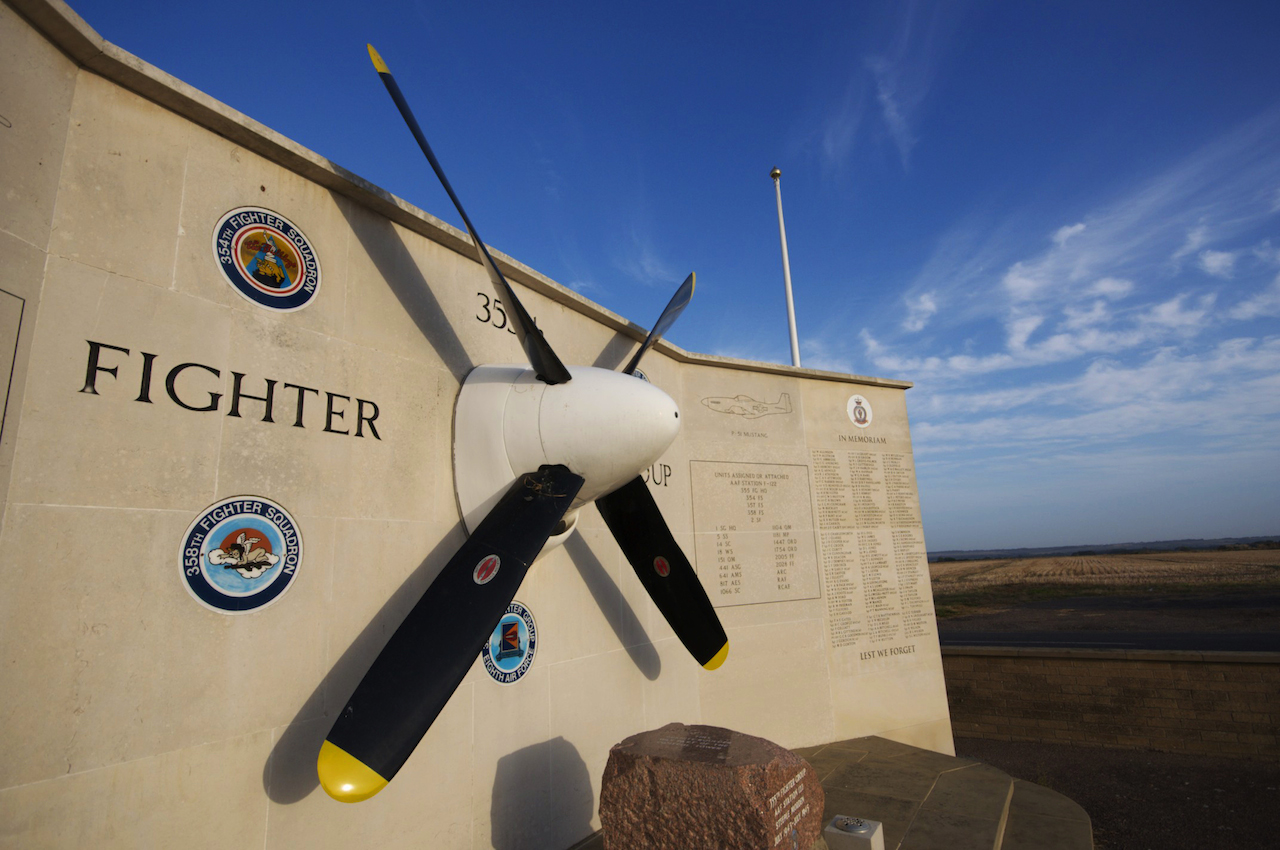 Steeple Morden airfield was set up as a satellite airfield for RAF Bassingbourn – which is approximately three miles away. This latter airfield was very much built along pre-war lines, with hangars and substantial brick buildings for accommodation and technical services. Despite being continuously occupied by the RAF and, subsequently, the Army since it was built, Bassingbourn still looks remarkably unchanged. Unfortunately, it is not generally open to the public.

The airfield museum, housed in the former control tower, is presently closed and it is not clear when it might re-open. Limited public access was allowed to this building, usually on Sundays, and so visitors could also see most of the rest of the site on their way to and from the main entrance. There was also a golf course and a practice ski slope – both of which have now permanently closed. The Army training units currently using the base may or may not be replaced or augmented by other Army units in the future. Either way, there seems to be no reason to suppose that even limited public access will be permitted any time soon.

Steeple Morden has, therefore, to stand as the principal area of aviation heritage interest in this part of the county. Despite being second-best compared to Bassingbourn, however, there are still several points of interest both on the site and in the nearby vicinity.

The airfield memorial is particularly impressive. Situated on the northern side of the airfield site, alongside the Litlington Road, the memorial consists of three large sections – the centre section indicating the squadrons of the 355th Fighter Group and dominated by a four-bladed propeller. Columns on either side of this section provide a summary history of the group and the units assigned to the airfield. The two outermost columns commemorate, on the left, the USAAF personnel from the base who lost their lives and, on the right, those in the RAF who lost their lives. 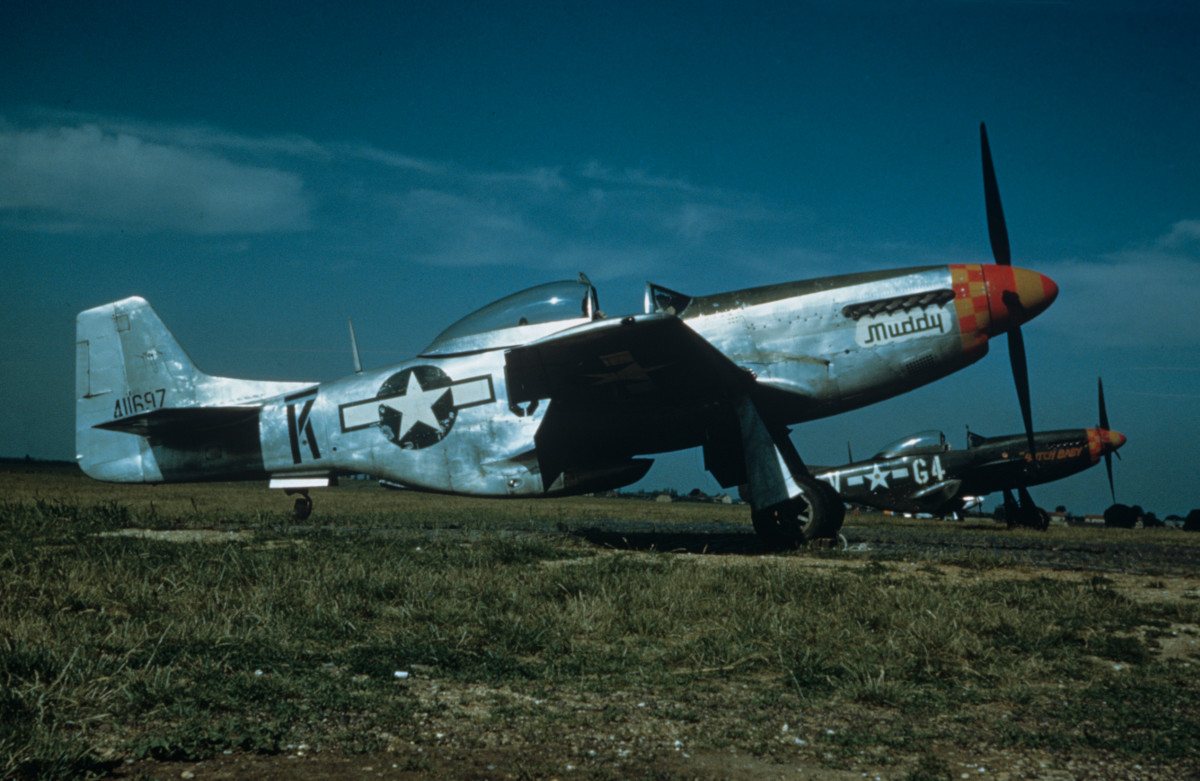 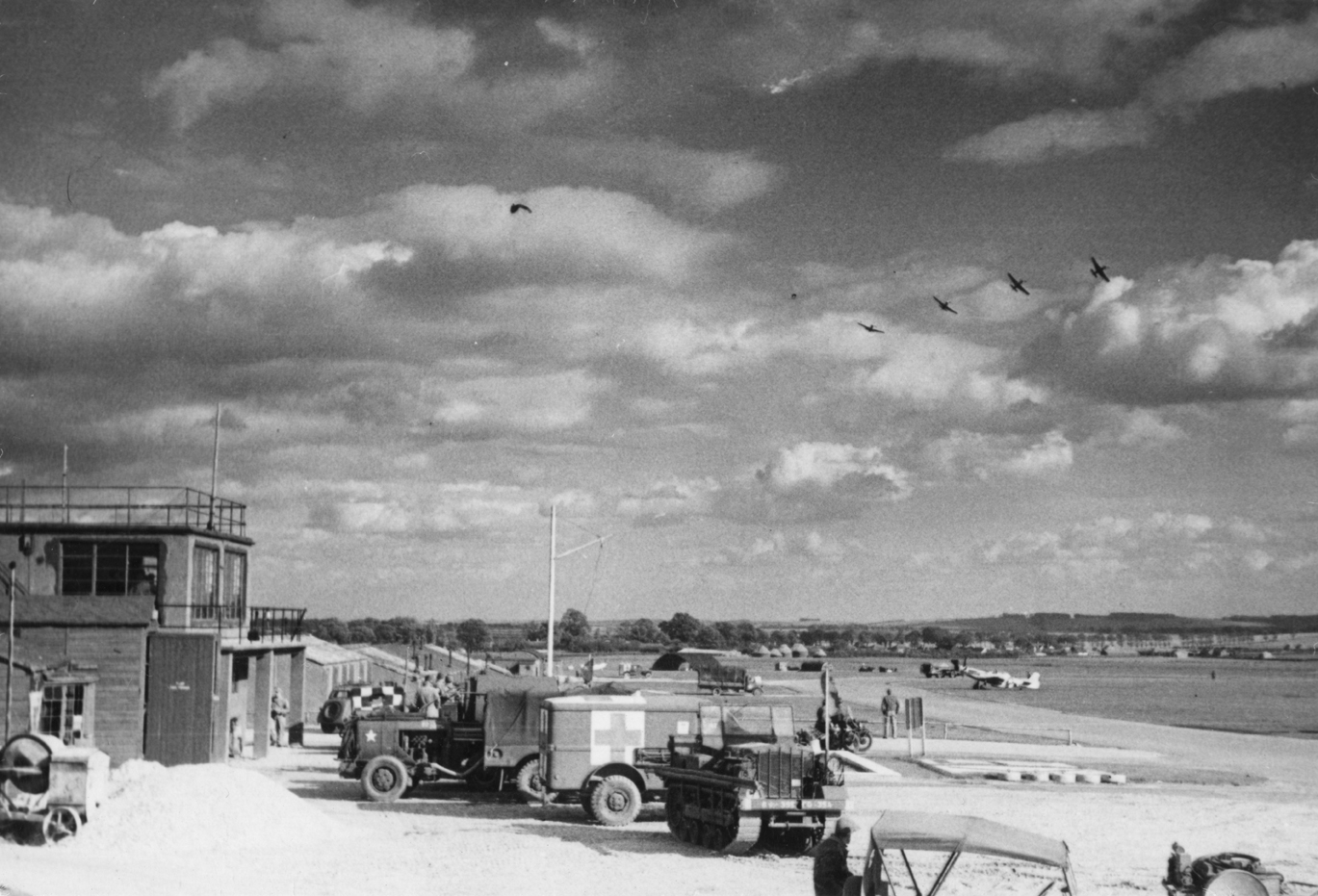 This memorial stands in the area once occupied by the airfield’s technical services – a mass of Nissen huts and other buildings now entirely swept away. Even the concrete paths and roads have been dug up. However, just beyond the memorial, three large Nissen huts remain. Although re-clad in shiny metal, the brick ends of these buildings have a suitably distressed appearance. 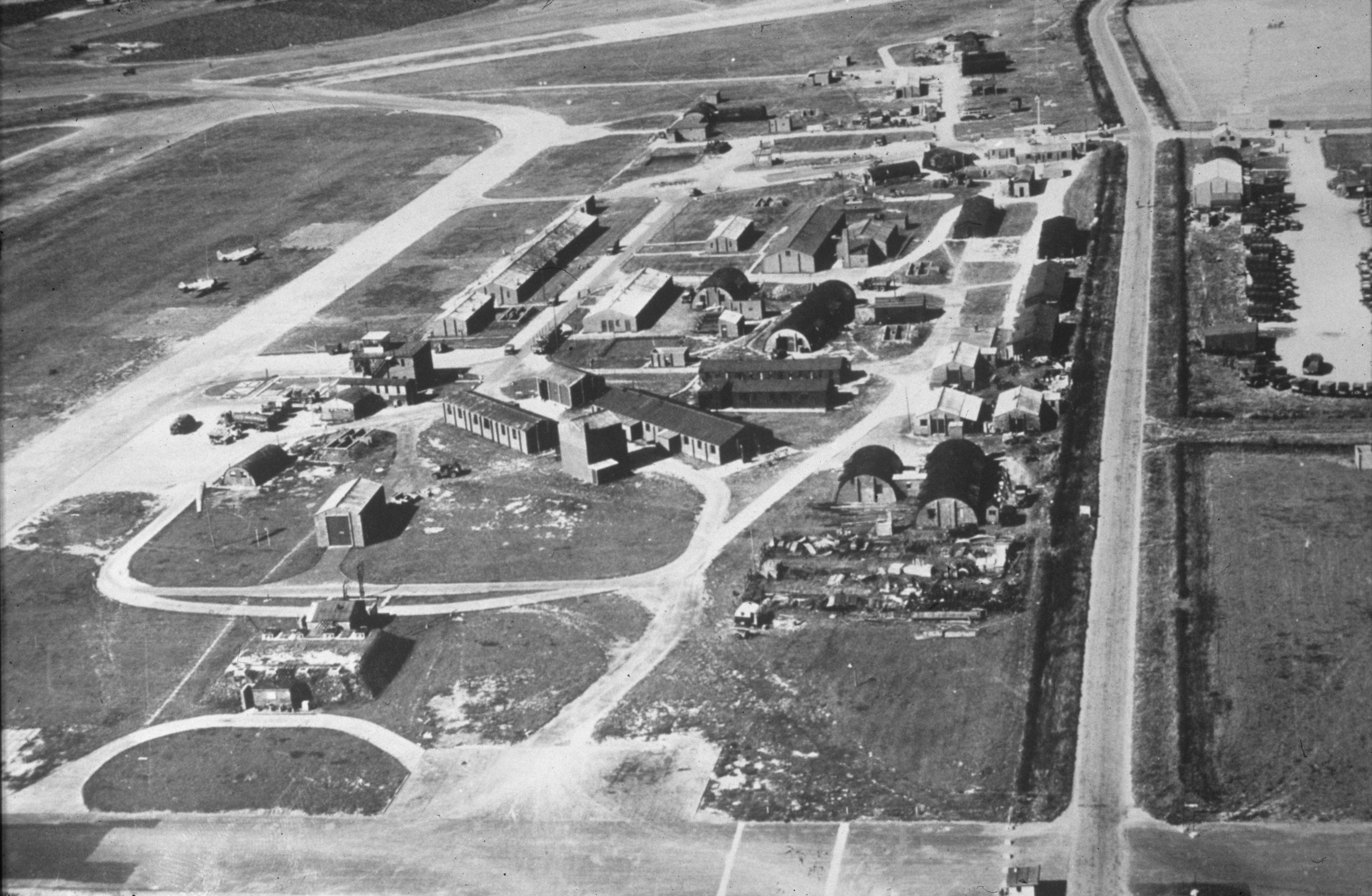 The runways have long since disappeared, but sections of the perimeter track remain. It’s possible to take a long circular walk from the southern end of the village, along a public footpath which traverses part of the airfield site, up to the memorial, and then back again along the Litlington road to the northern end of the village. It’s quite a walk, and not for the faint-hearted. The ground is not always flat and there aren’t many short-cuts if all that walking becomes tiring. However, the best way to soak up whatever atmosphere remains of an old airfield site is to walk across it and Steeple Morden offers that possibility.

A little further afield are two sites of particular interest. The first is the Commonwealth War Graves Commission burial plot in Bassingbourn-cum-Kneesworth parish cemetery. This contains the graves of 47 service personnel in two blocks. The first, and largest, contains those who died in World War Two – mostly based at Bassingbourn and including Australian, Canadian and New Zealand nationals. The second block is much smaller and contains the graves of those RAF personnel who died after World War Two.

On the night of 28/29 June 1942, Sydney was the Observer on board a Wellington IC bomber, (X3173), which had taken off from Steeple Morden to conduct a night training exercise. At some point early in the flight, the aircraft’s port engine reduction gear shattered and broke the propellor. With only one engine operable, the Wellington was still just about flyable. It was observed circling the airfield twice as the crew attempted manually to lower the landing gear. On the third circuit, the aircraft stalled and fell to the ground near the village of Ashwell – two miles to the south-west of the airfield. Two of the crew were injured in the crash – Pilot Officer DP Wadey RNZAF was taken to the RAF Hospital at Ely with serious chest injuries. Air Gunner Sergeant Cole was treated at base for relatively minor injuries and shock. Three other crew members died and two of them – Sydney and Percy Hamlin – are buried here.

The second site is the Wimpole Estate. This is a National Trust property which comprises Wimpole Hall – a country house dating back to approximately 1640 – as well as a working farm, a number of lakes, a Gothic folly, a walled garden and landscaped grounds. Although well worth a visit in its own right, the estate has particular aviation heritage interest because it was once the site of a large US military hospital. Known as the 163rd General Hospital, this large facility had been built in anticipation of being required to treat large numbers of casualties from the D-Day landings.

In the event, this was an unduly pessimistic estimate. However, casualties from surrounding airfields occupied by the USAAF – such as Steeple Morden, Bassingbourn, Duxford and Fowlmere – were treated here; as well as Army casualties shipped back from France as the post D-Day fighting progressed inland. Unfortunately, not a trace of the hospital now remains. It seems that the owner, at the time, of Wimpole Hall had never been in favour of the facility to start with and once the hospital was closed down, every trace of it was removed and the parkland on which it had once stood was returned to its original condition. 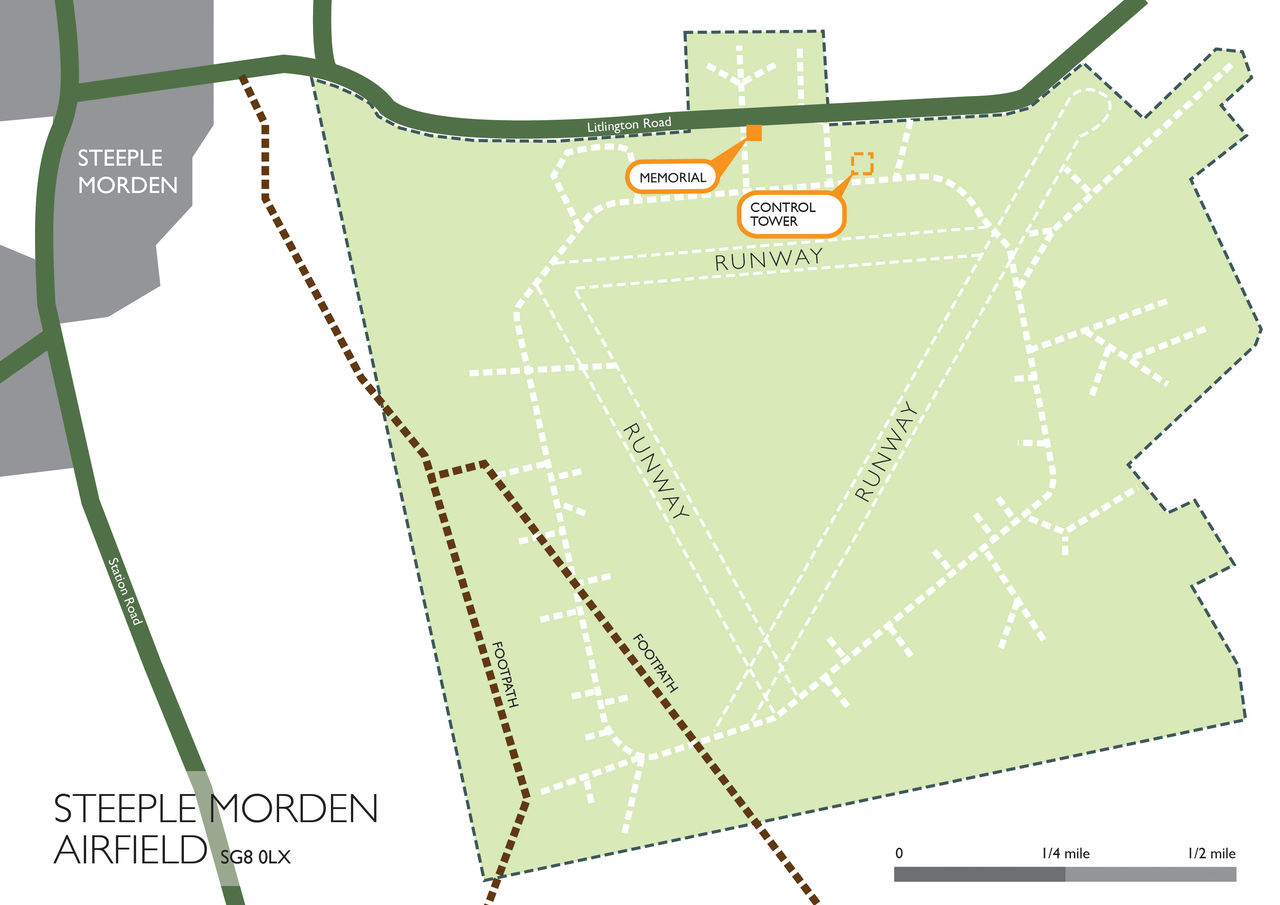 Situated just outside the village of Steeple Morden and on the Litlington Road, it’s best to aim first for the A505 and take the turning north to the village. Drive past Ashwell & Morden station up to the village and then follow the Litlington road. Coming from this direction, the memorial is on the right-hand side of the road and difficult to miss. Parking is possible nearby.

The nearest station is Ashwell & Morden – which is on the Cambridge – King’s Cross line. This is very much a small country station and taxis are not available. Be warned that it’s quite a walk from the station.

The roads are relatively quiet most of the time but they’re also fairly narrow. Cars often traverse them at speed, seemingly either unaware of, or entirely indifferent to, any other road user. Just like anywhere else, in fact.

There is a small gate between the memorial and the road which seems never to be locked. Therefore public access appears to be unlimited.

Places to eat and drink

There’s an excellent pub here, called The Waggon & Horses. Apparently there were once seven pubs in the village, this is the last one standing. It doesn’t seem to have its own website, but a Google search reveals several useful references to it.

This village also has one pub, The Crown. It’s right on the corner of Church Street and impossible to miss if you’re driving through the village. Also doesn’t seem to have its own website.

There are several pubs and restaurants within a few miles of the airfield site but, as always, the best range is in Cambridge. See the tourist information website below for details.